I updated my post, “Key Largo and Cudjoe Regional” to clean things up and add some links.  So if you already read it, please take another look.

I throw a lot of numbers around and I know that can get tedious.  I’m a numbers person – can’t help it.  A picture is definitely worth a thousand words.  So here it is:  Key Largo and Cudjoe Regional in pictures.

They’re both good-sized areas, but Key Largo’s population is about 40% larger.  Key Largo’s wastewater system is about 50% larger in terms of EDU’s.  [An EDU is equivalent to a single family home.] 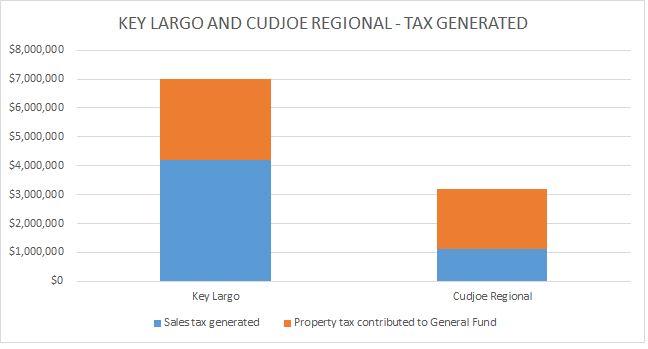 As you would expect, with its larger population and thriving business community, Key Largo contributes quite a bit more tax revenue than the Cudjoe Regional area.  The comparative tax contribution should not necessarily dictate the distribution of services.  However, this issue has become relevant because the BOCC and the county administrator have implied that Key Largo’s tax contribution is not significant enough to warrant fair funding of the wastewater project.  Their claims, as usual, are ridiculous, offensive and demonstrably false. 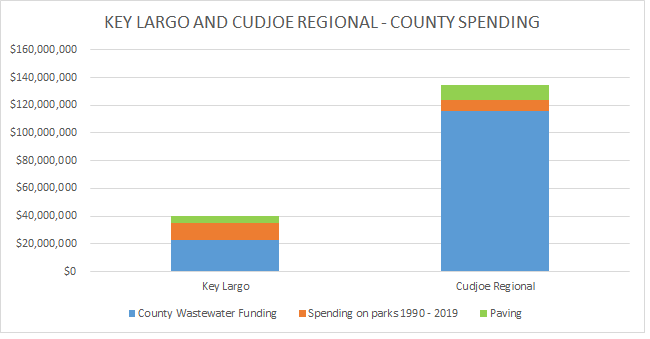 The BOCC has claimed that the wastewater funding disparity they have imposed on their taxpayers in Key Largo is justified because of spending on other infrastructure projects in the area.  Rowell’s Marina and the paving project are two prominent examples.  I’ve already debunked both of these claims and many others.  The chart above just brings it all into clearer focus.  I have updated the cost of the Cudjoe project from $170 million to $190 million and I’ve assumed that no significant state or federal funding will be received for wastewater projects in the future.  At this point that scenario is more likely than not.  It’s extremely unfortunate because the Keys still face enormous challenges.  We have very dedicated, capable state and federal representatives willing to fight for us.  But until the county demonstrates that it can act in a fair and responsible manner, I think it will be tough for the Keys to secure any significant state and federal money for any purpose in the future. 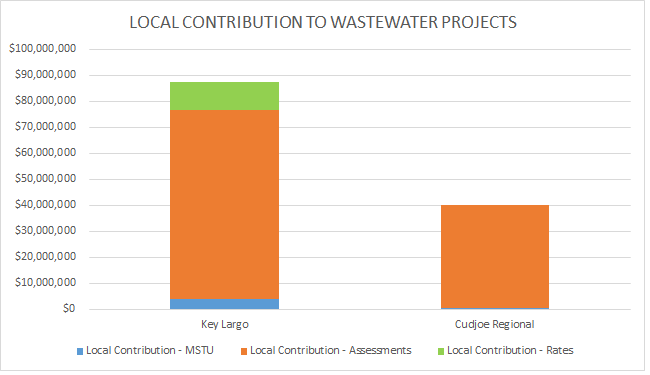 The BOCC has known about this issue for years.  They don’t care.  Addressing it would just cramp their style.  They’ve put a lot of energy into denying the facts and excusing their actions.  At times they’ve actually taken steps that worsen the situation.  They’ve put zero resources into actually solving the problem.  The only tiny step is the swap agreement, but comments made to the press since that agreement was approved call their commitment into question.

1 Response to Key Largo and Cudjoe Regional In Pictures