BOCC on the Record – Kolhage

Update:  When I first wrote this, I assumed Kolhage was simply trying to divert taxpayer money to the Lower Keys.  Now that I’ve had a chance to look into exactly how some of the players are related, I’m afraid there might be more to it than that.

This is a long one, but please stick with me.  There’s an election coming up in 2016.  This is the voters’ best opportunity to make positive changes.  It’s important to know where each county commissioner really stands on the issues.  Their votes and public statements tell you more than empty campaign promises ever will.

In the Upper Keys, Comm. Danny Kolhage seems to have a reputation as a “financial conservative”.  It’s a message that plays well in Key Largo.  But that impression doesn’t jibe with the public record – certainly not when it comes to wastewater.  Kolhage actually supports massive spending if it benefits the Lower Keys.  His perceived “financial conservatism” is limited and opportunistic.  It only shows itself when the topic is spending in the Middle or Upper Keys.

Kolhage, like all Monroe County commissioners, is elected county-wide.  Voters throughout the Keys have every right to expect that he will take their interests into account.  Unfortunately the exact opposite is true.  His hyper-focus on benefiting the unincorporated Lower Keys at huge expense to county-wide taxpayers has contributed to uncontrolled spending and egregious funding inequities.

As a commissioner who is responsible to all taxpayers, looking out for your “own” has to be balanced with the needs of all Monroe County citizens and with available resources.  The record demonstrates that Kolhage is incapable of striking this balance.  When someone like Kolhage has too much influence, all taxpayers are in trouble.  There’s uncontrolled spending in some areas and total neglect in others.  That neglect only leads to greater expenses later on.  It’s a recipe for disaster.  This is where Kolhage is leading us.

Kolhage has voted “yes” on every single spending increase on the Cudjoe Regional project since he ran unopposed in 2012.  At this point, the BOCC was already well on its way to making a mess of Cudjoe Regional.  The BOCC lowered assessments from $5,700 to $4,500 in July 2012 – worsening the funding disparity and imposing an additional $10 million financial burden on county-wide taxpayers.  Clearly, the wastewater projects were already off track in November 2012.  But Kolhage’s lack of financial discipline would make things much worse – $43 million worse.

October 2013 – Kolhage along with three others, supported a $20 million spending increase.  District 5 Commissioner, Sylvia Murphy, was the only “no” vote.  (She did a very good job, but I’ll get to her later.)  I urge people to listen to that part of the meeting.  It’s about an hour and a half long, but it says a lot about the mind-set of each of the commissioners.

Kolhage was not content with the spending increase on the table.  When other commissioners discussed parity, he quickly changed the subject back to more spending.  Spending that wasn’t even on the agenda for approval at that point.

January 2014 – The BOCC declined one massive gravity conversion by a 3-2 vote, but did approve another one by 3-2.  Kolhage voted for both.  He apparently was not much concerned about his “financially conservative” image at this point.  Murphy and Neugent were the two “no” votes.  Rice was the flip-flopper.

April 2015 – A $7.1 million for the deep well is unanimously approved.  I actually support the deep well.  But I wonder why it wasn’t planned from the beginning.  The original permit application calculated influent flows over one million gallons per day.  At this point, they’re so over budget $7.1 million is peanuts.

Kolhage has been silent on the disparity issue other than to occasionally express discomfort with the swap agreement.  While I also have concerns, I recognize that the agreement is the only mechanism available at present to provide financial relief to Key Largo taxpayers.  For that reason, I grudgingly support it despite my misgivings.  I am curious to know what Kolhage would propose as a solution in the absence of the agreement.  My guess would be nothing.  He’s given no indication whatsoever that he would like to see the disparity issue resolved.

At the November 2014 meeting, Kolhage tried to delay a vote regarding a housekeeping matter that would make it possible to go forward with the agreement.  He claimed the vote was “premature”.  This is odd because just recently, the county administrator claimed the agreement  may not go forward because the timeline was too “tight”.  So which is it?  Whichever excuse is most convenient in the moment I suppose.  Too be fair, Kolhage did vote for this change and ultimately for the agreement.  There is no doubt that public pressure and the fear of looking bad had an awful lot to do with that.  That’s really the lesson in all of this.

There was a great line in the Blue Paper this morning:  “And transparency is power“.  Yes.  Yes, it is.  I’ve said it a billion times.  The only thing the BOCC hates more than doing the right thing is getting caught doing the wrong thing.  Public criticism can be a powerful weapon – sometimes its the only weapon.

Here’s the most interesting thing about Kolhage’s track record:  the massive $43 million spending increases that he so vigorously supported do NOT even benefit his own district.  Sadly, it hasn’t done much to appease Cudjoe Regional customers either.  It seems that all he’s done is squander the resources needed to address other pressing needs in the county.

Here’s the map again.  Kolhage represents District 1 (Key West, Key Haven, Stock Island).  Cudjoe Regional is located in District 2, represented by George Neugent.  Neugent, strangely enough, has taken a much more responsible position on wastewater issues than Kolhage has, but I’ll get to him later. 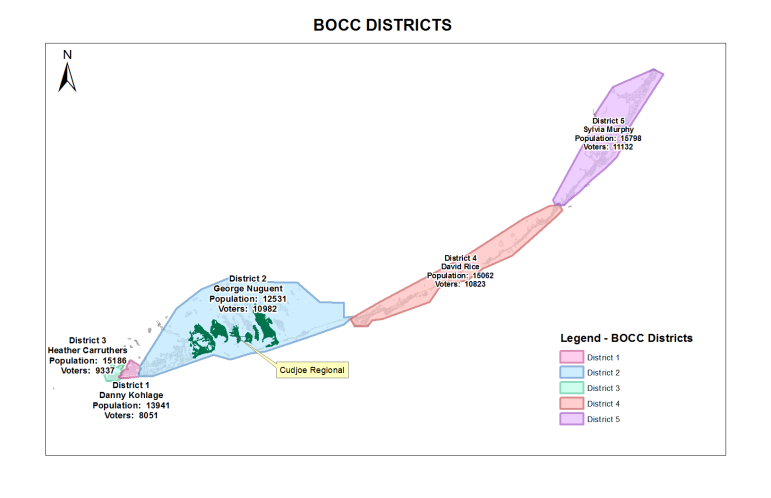 So who really benefits from all this wasteful spending?  It’s certainly not the taxpayers.

I wrote about Kolhage’s imbalanced support of spending on parks here.  To be very clear, I have no issues with any of the park projects.  While county spending is generally biased and out-of-whack, spending on parks isn’t nearly as bad as wastewater.  My purpose here is to examine Kolhage’s reasoning or lack thereof.  Kolhage opposed the purchase of Rowell’s Marina in Key Largo saying that the purchase of new land for a park was not “needed”.  However, the $5 million purchase of Rowell’s Marina serves multiple public purposes.

About $5 million is to be used for improvements to Bernstein Park on Stock Island in Kolhage’s district.  Kolhage, of course, felt that this park was “needed”.  So what do the taxpayers get for their money? 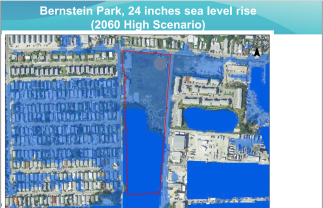 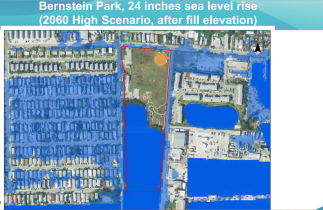 My point isn’t to pick on Bernstein Park.  The folks in Stock Island are taxpayers, too, and they deserve an equitable level of service, which is all I want for Key Largo citizens.  But it is important to highlight Kolhage’s myopic reasoning because that reasoning has lead to immense waste and huge inequities.  He seems to have difficulty embracing the concept of fairness and doing what’s best for the greater good.  Ultimately, that is bad news for all taxpayers not just those in Key Largo.

Despite occasionally posing as financially responsible, Kolhage is a good ol’ boy doing things the bad ol’ way.  Monroe County taxpayers cannot afford politicians like this.  If Mr. Kolhage plans to hold on to his seat, I hope the taxpayers ask him some very hard questions.

1 Response to BOCC on the Record – Kolhage