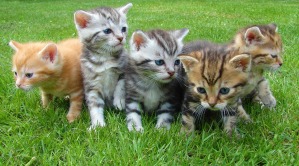 My letter to the editor was published on KeysNet.com.  There’s another one about “cat hoarding”.  My letter is about the county’s mishandling of the issue – specifically by inflating the number of animals handled at the Lower Keys shelter and the Middle Keys shelter.  I can only guess this was done to obscure the differing funding levels.  Or perhaps there’s another SUFA-type situation brewing.  It’s impossible to say at this point.

The other letter , I think, is supposed to be a defense of the Upper Keys animal shelter.  The blame for the high cat population is placed squarely on “those people” from Miami.  A nebulous problem without a solution.

Miami-Dade has a raft of issues, that’s for sure.  Miami-Dade shelters went “no kill” and that generated a whole new set of problems.  Staff is accused of cooking the numbers to reach the magical “no kill” goal.  That is a kill rate of 10% or less.  Strays are turned away.  Animals are labeled aggressive even when they’re not to justify euthanizing them.  All this so the shelters can pretend to meet some arbitrary number.

Which brings me back to Monroe County and their cooking of the books.  Lying only makes the problem worse.  That’s why I call it out.  When county staff obscures the facts, they also obscure possible solutions.  All we’re left with is people talking past each other, while the problem persists.

Let’s start with a few facts.

Now let’s tackle some of the recurring rhetoric.

It’s the fault of “those people” in Miami.

Let’s say for the purposes of discussion that this is true.  People drive animals down the stretch and drop them off in the Key Largo area.  Or as the operator of the Upper Keys shelter suggested, the animals wander down on their own.  There are apparently many abandoned dogs in the Redlands so it’s possible.

Garrettson also said “feral dogs” from the Redland community in south Miami-Dade County make their way to the Upper Keys.

If large numbers of feral dogs and cats from Miami-Dade are making their way into Key Largo, that would certainly present a challenge for local animal control.  It would also make sense that the Upper Keys are disproportionately affected by this problem.  But if the Upper Keys shelter has to contend with this additional burden, why do they have the lowest per animal funding rate of all the animal shelters in the Keys?  And why did county staff try to misrepresent that fact in the 2015 State of the County report?

How does publishing misleading numbers help to establish appropriate targets and funding levels?  How does that help allocate resources to where they are most needed?

Trap-Neuter-Release (TNR) is harmful and is equivalent to “cat hoarding”.

I’ve been pretty upfront about the fact that I really do not know what the solution to this problem is.  In fact, I said exactly that in my letter.

I don’t know what the solution to the high kill rate is, but I do know that lazy government officials and phony numbers won’t help. The county needs to take an honest look at this issue.

The problem is clear.  There is a high population of feral and/or free-roaming cats in the Upper Keys and the kill rate at the local shelter is very high compared to the other shelters.

TNR seems to be a popular option.  Proponents argue that it is also a very effective solution, and many provide numbers to back up their claims.  It is a method accepted by the American Veterinary Medical Association (AVMA).  By the way, the AVMA’s policy does allow for euthanasia as well.  TNR does not have to be an all-or-nothing proposition.

Opponents argue that TNR is tantamount to abandoning the cats to a life of misery where they will continue to decimate wildlife, spread disease and be a nuisance to the community.  A critical look at TNR can be found here.  This site favorably references an expanded version of TNR.  They call it TENVAC (Trap-Evaluate-Neuter-Vaccinate-Adopt-Contain).

Public education has also been mentioned as part of a possible solution.  I’m all for it.  Perhaps going forward, the county might consider using our tax dollars to educate and enlighten rather than obscure and mislead.  Better yet, they could fund a community group who is better qualified for that particular task.

It really boils down to this:  What works?  What will actually reduce the population of feral and/or free-roaming cats (or dogs)?  The situation in the Upper Keys seems to indicate that the high euthanasia rate is not getting the job done.  People continually observe and comment on the cat overpopulation problem in that area.  The “cat hoarding” letter mentioned above is the most recent example.  There have been several others.

I would love for people to be able to get past the defensiveness and the bickering.  I think the county’s misinformation campaign contributes to the counter-productive dialog.  As a result, no progress is ever made.  That’s why I call out the dishonesty.  It is corrosive.  It distorts the issue and stands in the way of resolving not only this problem, but many others facing the Keys community.

This entry was posted in Animal Shelter. Bookmark the permalink.