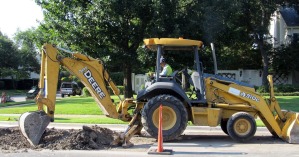 Update:  I found the iPhone Bandit’s resume.  I’m not seeing an “extensive background” in wastewater.  I guess the Citizen was leading us around by the nose again.  I wonder if they even looked at the resume before writing that article.  I’m guessing no.

It’s funny what I find digging through the archives.  I was researching something else about the Big Coppitt project and found this story on KeysNews.com from 2008 entitled “Commission taps sewer expert to lead county“.

Roman Gastesi is a sewer expert?  It’s hard to believe based on how the sewer projects turned out.  Why is he hiding his light under a bushel?

The Monroe County Commission last Wednesday chose a new county administrator who has an extensive background working on one of the Florida Keys’ most important issues — wastewater.

I actually requested Gastesi’s resume one time.  I was just really curious.  I also asked if anyone ever verified his education.  Turns out they didn’t, but they went ahead and did it after I asked about it.  Everything seemed to check out, but I don’t recall ever seeing any sewer experience.  Hmmm…a sewer expert.  Interesting.  I’ll have to see if I can find that resume.

There’s another story from 2008 called, “Request could stall Keys sewer projects“.  This one was about the Army Corps money.   Remember that?  I wrote about it here.  It was one of the county’s lowest moments, and they’ve had many low moments.  What’s most interesting is what Rep. Ileana Ros-Lehtinen’s office is quoted as saying.

“Any change to the funding strategy would require additional environmental assessments by the Army Corps,” the e-mail states. “This means that the Army Corps would have to use congressionally appropriated dollars for an environmental assessment of those areas that were not originally included in the funding schedule. In addition to diverted funding, this whole process could take 6-8 months, which would delay the project considerably.”

Well, I think it would have taken longer than 6-8 months.  The county would have had to get its act together to proceed through the agreement process.  The Army Corps asks for very detailed information.  How long would that take?  Two years?  Three?  Plus it would have created a huge headache for the Army Corps.

The Keys water quality projects are a microscopic speck in the Army Corps budget.  How much time do you suppose this gigantic bureaucracy would want to dedicate to reworking the funding of this comparatively insignificant project that’s suddenly become a huge headache because of local yokel nonsense?  If you said zero, you deserve a cookie.

Our U.S. representative at the time clearly did not approve of this plan.  A few years later, the county did it anyway in the sleaziest, sneakiest, shadiest way possible.

Roman “the sewer expert” Gastesi, and the county commissioners who are supposed to be in charge of him, seemed to think this stunt was cute and clever.  It was not.  It was stupid and unprofessional.  It was a slap in the face to our federal representatives who continuously stressed how important unity was in securing and maintaining this funding source.

It was also a slap in the face to Key Largo taxpayers.  The funding disparity existed at this time and the county was well aware of it.  When they sent their lobbyist to interfere with the Army Corps funding they knew they were making things worse.  They apparently didn’t care.

Koppel has since changed course, and now plans to ask the Monroe County Commission to divert $14 million of $20 million in tax revenue designated for Key Largo infrastructure projects.

Koppel went on to say this.

“In the spirit of cooperation and working together, we need to equally split the federal and state funding,” Koppel said. “None of the federal money is going to the other areas of unincorporated Monroe County. This is an effort to be fair. There is a recognition that this has to be adjusted.”

Hmmm…well, why not equally split infrastructure sales tax money, too?  You’ll notice I never asked for $125 million so that Key Largo gets the exact same amount of infrastructure sales tax money as everyone else.  I ask for $26 million because when project costs and all funding sources are taken into account that’s what it would take to even up the contribution for Key Largo taxpayers on a per EDU basis.

The county’s bizarre notion of “fairness” has been around for a long time.  As I’ve said, Gastesi isn’t the disease, he’s just a symptom.  County dysfunction is long-standing and deeply entrenched.  I wouldn’t be sad to see Gastesi go.  In fact, I think that is a necessary step if the county is ever going to get its act together.  But the problem goes much deeper.  It won’t simply go away when Gastesi does.

Back to that “sewer expert” story for a minute.

In his speech before the commission, Gastesi said he is “about open and honest government” and expounded on the importance of protecting the environment. “The environment is the economy,” he said. “We have to save our environment.”

This entry was posted in BOCC, Monroe County, Wastewater. Bookmark the permalink.