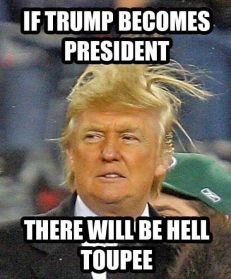 As it happens, the people did not elect an unfit buffoon as president.  They elected Hillary Clinton.  She is currently ahead in the popular vote, although the counting goes on.  The unfit buffoon actually was elected president based on the way electoral votes are awarded.  In other words, the will of the people has been bypassed because of a senseless bureaucratic process for the fourth time in history.

So if the electoral college was meant to safeguard the Republic in the event that the people elected a raging demagogue, why can’t it be used to safeguard the Republic when the people did not elect a raging demagogue?  To put it another way, the electoral college exists in case the will of the people goes terribly awry, but why can’t it also be used to preserve the will of the people when it hasn’t gone terribly awry?  Hillary Clinton is an imperfect candidate to be sure.  But she is committed to our system of government.  She is knowledgeable, experienced, and capable.  And if she’s proven anything this campaign season, it’s that she is tough and level-headed, keeping her cool in very trying situations.  Unlike the thin-skinned Trump, who launched into bizarre, off-topic tirades against Rosie O’Donnell, Alicia Machado and many, many others.

By the way, Trump himself bashed the electoral college system in a 2012 tweet.  That tweet has since been deleted from Trump’s account but unfortunately for Trumpster-the-Dumpster, the internet never forgets.

This entry was posted in Elections, Off topic. Bookmark the permalink.