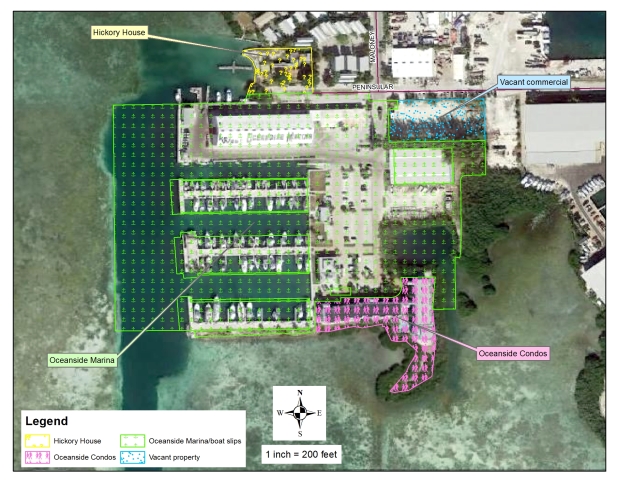 And here are close-ups of each of the sender sites.  Remember, those were identified in the original development agreement.  There were three, the Stock Island site, the Cudjoe site, and the Summerland site.

The Stock Island site is below.  This site contributed seven (7) Transferable ROGO Exemptions (TRE’s).  That doesn’t seem unreasonable based on this aerial from 2014, but I wonder if those mobile homes are still there?  And if they’re still occupied? 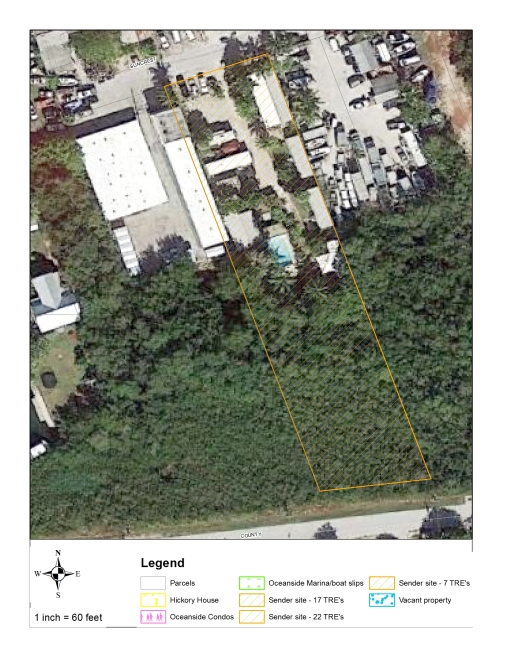 The Cudjoe site, below, contributed seven (17) Transferable ROGO Exemptions (TRE’s).  Again, there’s nothing about the aerial that gives me pause.  But according to the Property Appraiser, the 17 mobile homes were replaced with 12 affordable units.  More details toward the end.  Wouldn’t that compute to five (5) TRE’s?  Confusing.  Mysterious.

The Summerland site, which sent 22 TRE’s, is mapped below.  The roof  count from 2014 looks about right but has the site been abandoned?

What is the definition of a TRE (Transferable ROGO Exemption) exactly?

Here is some information from the 2030 Monroe County Comprehensive Plan.

Monroe County shall maintain a Transfer of ROGO Exemption (TRE) program,
that allows for the transfer off-site of dwelling units, hotel rooms,
campground/recreational vehicle spaces and/or mobile homes to another site in
the same ROGO subarea, provided that they are lawfully existing and can be
accounted for in the County’s hurricane evacuation model. Dwelling units may
be transferred as follows:

i. units from the Big Pine Key and No Name Key ROGO subarea may
also be transferred to the Lower Keys ROGO subarea.

Sender Site Criteria:
1. Contains a documented lawfully-established sender unit recognized by the
County; and
2. Located in a Tier I, II, III-A, or III designated area; including any tier within
the County’s Military Installation Area of Impact (MIAI) Overlay.
Receiver Site Criteria:
1. The Future Land Use category and Land Use (Zoning) District must allow
the requested use;
2. Must meet the adopted density standards;
3. Includes all infrastructure (potable water, adequate wastewater treatment
and disposal wastewater meeting adopted LOS, paved roads, etc.);
4. Located within a Tier III designated area; and
5. Structures are not located in a velocity (V) zone or within a CBRS unit.
No sender units may be transferred to an area where there are inadequate facilities
and services.

My assumption is that these sender sites can no longer be occupied or developed.  Seems logical, but is that assumption correct?

The handling of sender sites is also described in the comprehensive plan.

Policy 101.13.1
Monroe County shall monitor the existing TDR program and maintain land
development regulations which address identified deficiencies in the program and
evaluate the following:

1. criteria for designation of sender and receiver sites pursuant to Policy
101.13.3;
2. mechanisms to enhance the value and marketability of TDRs such as
assigning density bonuses to receiver sites;
3. the status of sites which have transferred development rights, including the
possible requirements that sender sites be dedicated as public or private
open space through conservation easement or other mechanism. The LDRs
shall continue to require that a restrictive covenant be recorded on the
sender site deed at the time of the building permit issuance for the receiver
site; and
4. management and accounting system to track TDRs.

Speaking of, how are the restrictions tracked?

Well, it appears that they are sometimes (but not always) noted on the property record available from the Property Appraiser’s website.  That generates a follow-up question:  In practice, is the use of the sender sites actually scaled back in accordance with the TDRs that have been removed?  Who follows up make sure?

Data from the Property Appraiser’s site suggests that the mobile homes still exist at the Stock Island site.  The taxable value table indicates that the status of the property tax-wise hasn’t changed, and there’s nothing to indicate that the mobile homes have been modified or demolished.  Link to print out here.  Presumably, the site is occupied just as it was before?  If so, isn’t that a violation?  Who checks?

There’s been a lot of activity at the Cudjoe site.  According to the property appraiser’s record, this site originally had one restaurant (Coco’s Cantina) and seventeen (17) mobile homes.  The restaurant building was demolished and the 17 mobile homes were replaced by 12 affordable housing units in 2015.  I’m a little confused as to how 17 ROGO exemptions could be transferred if 12 of the 17 mobile homes were replaced.  Wouldn’t that leave five?  Does the restaurant have something to do with it?  Is it worked out somewhere in an attachment to the development agreement?

The Summerland site is set up as a 22-unit mobile home condominium.  Meaning that each unit is treated as it’s own parcel.   As of 2014, the site was still occupied by mobile homes.  That much is demonstrated by the aerial.  Here’s a link to the property appraiser’s page for one of the units.  It doesn’t look the transfer has changed the amount of tax owed at all, and there’s no indication that any of the units have been demolished or modified.  Again, who checks?

The sale note at the bottom  of the parcel record indicates that the entire property (ie. all 22 units) was sold to Summerland Palms Investors, LLC (a Singh company) in 2015 for $2 million.  Here’s the warranty deed.  Strange thing.  The 2015 WD is between Summerland Palms Investors,LLC and Mobile Homes Holdings, LLC, but the sales history also shows a 2013 WD between Special Acquisitions III, LLC and Summerland Palms Investors, LLC, with a sales price of $890,000.  It’s hard to say where Mobile Home Holdings, LLC comes into the picture exactly, but they’ve got the same mailing address (138 Simonton Street) as Barton Smith’s law firm, Smith-Orepreza-Hawks.  Don’t know if any of that is important, but worth making a note of it I think.

Lots of questions.  Lots of unknowns.  Lots to find out.