Update:  I added a graphic below.

There’s no question that recent events have showcased the dedication and competence of Key Largo Fire and Rescue.  This terrific editorial in the Reporter/Keynoter really says it all.

After rightfully singing the praises of the department, the editorial says this.

We cover Key Largo’s fire department and the special taxing district that funds it like we would any other government entity — with objective scrutiny. Taxpayers’ money equips the firefighters, fuels the trucks and keeps the lights on at the stations, and the public deserves to know how their money’s being spent. The coverage can be critical at times.

Well, I agree that the newspaper certainly has a duty to report accurately and objectively.  (If only all newspapers in the Keys agreed with that concept.)  But I hope the editorial writer understands that, as a special district, KLFREMS does NOT have access to certain funding sources – specifically the infrastructure sales tax.  Municipalities like Islamorada, Marathon and Key West automatically receive their share.  The share for all the unincorporated areas goes to Monroe County.  And so, an independent district like the KLFREMS must rely on the county to distribute the tax fairly throughout the unincorporated area.

Municipalities and the county use the infrastructure sales tax (which is generated county-wide) to fund emergency vehicle replacements.  KLFREMS can, too, but only if granted funds by the county.  Otherwise, it comes out of the pockets of Key Largo taxpayers – a form of double taxation.  It would be easy enough for the county to resolve this in a fair way, by treating KLFREMS vehicle replacements the same way they treat county vehicle replacements.  After all, Key Largo taxpayers should benefit from the infrastructure sales tax to the same extent as any other taxpayer in the unincorporated area.  Unfortunately, the BOCC prefers to play vile political games.

The good folks of the KLFREMS do a fantastic job.  I think this editorial highlights what’s really at stake and why equitable funding is so incredibly important.  There’s just no place for political nonsense when it comes to fire and emergency services.  The local press does not pay attention to this issue, but it’s definitely a story worth telling.

I added a graphic below.  It’s a map of fire and ambulance service in the Keys.  The table shows the average annual sales tax generated in area.  Those figures came from the Florida Department of Revenue, which keeps records by zipcode.  The table also provides information on how much the county has spent on capital projects related to fire and rescue services in each of the unincorporated areas.  Again, there’s no reason the county should be demanding that Key Largo taxpayers be subjected to double taxation.  There certainly hasn’t been any excessive spending in that area. 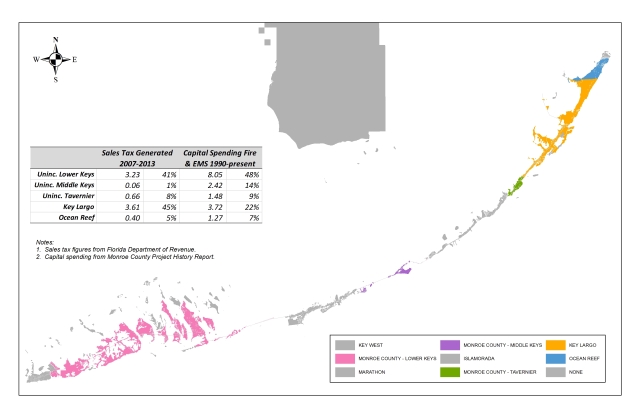 This entry was posted in BOCC, Media, Monroe County. Bookmark the permalink.