More About That $38 Million Overrun 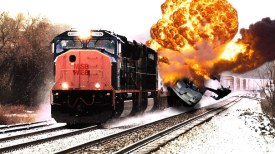 Cudjoe Regional isn’t Monroe County’s only disastrously over budget train wreck .  That’s “only” $49 million over and counting.  As it turns out there are another five capital projects that are now $38 million over budget.  According to KeysNet.com, these projects started out at $25 million.  The projected costs now stand at $63 million.  This mind-blowing incompetence seems to be the norm for Monroe County government.

I wrote about this in an earlier post, which was really just me throwing my hands up in the air.  I was just so disgusted I didn’t know what to say or do.  Since I’m a glutton for punishment I actually watched that segment of the February 10, 2016 BOCC meeting.  (It won’t work in all browsers.  I watched it in Internet Explorer.)  I didn’t see anything new or enlightening.  It’s the same old dysfunctional dynamics that have caused the county to fail over and over again.  If you watch enough of these meetings, a pattern starts to emerge.

My observations are recorded below.

I believe there’s a single issue at the root of all this, and that is fundamental dishonesty.  The county lies constantly – to themselves, to the taxpayers, to everyone.  Here’s the latest very sad example.  As a result, the decisions they make inevitably go wrong.  Unfortunately, reality always catches up with you.  The BOCC has managed to keep ahead of it on the wastewater projects for two reasons.

Here’s the thing, the state isn’t always going to be standing by with a huge check.  They’ve got other needs and other priorities.  The BOCC’s cries of poverty will eventually get old especially since they refuse to control spending.  That is likely to come back and bite the Keys as a whole.  I hope the Florida Keys Stewardship Act* passes and its certainly looking good this year.  But the BOCC has to put as much effort into controlling costs as they do into securing state and federal money.  “Other people’s money”** won’t always be there to paper over the financial messes created by the BOCC.

Here’s the other thing, the county cannot continue to pump Key Largo (or any of the taxpayers) dry.  You can’t get blood from a turnip.  In general, BOCC members are very smug about Key Largo’s failure to incorporate 15 years ago.  They take that as permission to treat the area in a grossly unfair manner.  I would like to think that folks in Key Largo will eventually get fed up and take some sort of action.  But they haven’t so far.  Too busy working two jobs I guess.

Whether Key Largo citizens take action or not, Key Largo tax money is not an unlimited resource.  There are signs that the economy in the area is already lagging behind.  Business in the Keys has been brisk for the past few years, and that masks the issues to a certain extent.  What happens when business drops off and the county is halfway through their bloated slate of projects?

I believe drastic changes are necessary.  The current BOCC will only continue to overspend, counting on the state or local taxpayers to bail them out.  As mentioned earlier, a major contributing factor is chronic dishonesty.  The BOCC lies about animal control.  They lie about the  Emergency Services Surtax.  They lie about wastewater funding.  And I’m sure this is only the tip of the ice berg.  I hate to think what other unpleasant surprises might be lurking around out there.

*Ideally Sen. Gaetz’s ethics bill will pass as well.  This might help to ensure that money received from the state is used in a way that actually benefits the taxpayers rather than a few well-connected insiders.

**”Other people’s money” is an odious term that the BOCC once used to describe state and federal money.  I hated it because it was always used in a way that implied that this was a windfall they could spend carelessly.  As it turns out, they’re careless with all money – state, federal and local.

This entry was posted in BOCC, Bubba System, State government. Bookmark the permalink.