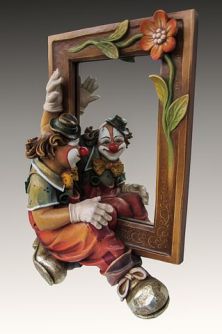 Mirror, mirror on the wall who’s the biggest offender of them all?

The Citizen served up an extremely hypocritical lecture urging the community “to stand up and hold our elected officials responsible for the financial harm they are inflicting on our community“.  Really?  How interesting.

There are two major points to be made here.

First of all, when it comes to enabling reckless, incompetent, and possibly corrupt local government, the Citizen is the worst offender.  By far.  Numerous examples can be found on this blog.

Second, concerned private citizens are already very active in monitoring and vocally opposing all that is wrong with local government in the Keys.  There’s this blog and the Coconut Telegraph.  There are numerous citizen’s groups.  Dump the Pumps, Dig Deep Cudjoe, Last Stand, Key Largo Federation of Homeowners.  All these groups are pursuing positive change at the local level.

How is possible to forget the Citizen’s one-sided body slam against a couple of property owners seeking relief?  When those property owners attempted to “hold our elected officials accountable”, they didn’t receive very positive coverage from the Citizen.  Quite the opposite.

For these reasons alone, the Citizen’s editorial is extremely obnoxious.

But it’s not just the obnoxiousness that has me worried.  I’m concerned that the Citizen is once again seeding the ground in order to help the county pass another damaging financial proposal.  Remember the Emergency Services Surtax (ESS)?

That was sold as a “tax shift” that would place more of the tax burden on tourists.  The problem is, there’s no way the proposed scheme would accomplish that.  In fact, it would have increased the tax burden on local households, while reducing it for out-of-county property owners (and friends of commissioners).

As is typical these days, affordable housing is the hook.

Many of our local officials have publicly recognized the housing “crisis” facing the inhabitants of our island chain. Surely they have heard the outcry from countless constituents. On the many resident surveys solicited by our local governments (and paid for by us), affordable housing is the No. 1 problem cited by the community. Surely our local officials have read the surveys and listened to our concerns, right?

Apparently not. Although much lip service has been paid to this identified crisis, our local governments have turned down almost every affordable housing project that has been brought before them in the past year.

But we already know the scam here, right?  The fact is the “crisis” has been exacerbated (if not wholly created) by local governments who fail to follow their own rules, refuse to follow through on their own initiatives, or dream up money-wasting schemes which do nothing to actually address the problem.

In fact, local governments are attempting to use the affordable housing “crisis” in order to divert huge sums of taxpayer money.  Remember Peary Court?  Remember the Citizen’s confused, nonsensical reaction?

Now, almost every local government and utility has proposed or is discussing a property tax or rate increase for the upcoming year, including Monroe County, the City of Key West, Monroe County School Board, Mosquito Control District, Keys Energy, City of Key West (stormwater fees), and Key West Resort Utilities. All of this is in addition to the healthy annual increase in windstorm insurance coming our way.

At some point, fantasy slams up against reality.  Monroe County has been spending like there’s no tomorrow.  Well, there is a tomorrow, and tomorrow is here.  The bills are coming due.  I’ve researched and written about the huge and alarming increase in the county’s debt burden.

Again, I have to ask where was the Citizen?  These issues have been building for years.  What are they doing to address this financial recklessness besides writing whiny editorials?

Out pointing fingers at the usual scapegoats, of course.  How helpful.

The county also neglected to mention that when it purchases property such as Rowell’s Marina, at the taxpayer’s expense and over market value, it will then need to hire additional employees and pay for all of the improvements and maintenance.

Rowell’s Marina is invariably used as an example of wasteful spending.  Maybe it is, maybe it isn’t.  Truthfully, I was never a big supporter of that purchase.  I felt that infrastructure sales tax money should have gone toward balancing out negligently unfair wastewater funding.

Even so, purchasing Rowell’s Marina accomplished two stated county goals, both of which have wide-support throughout the Keys.

Developers had big plans for the Rowell’s Marina property, and those plans had little to do with affordable housing.

The Citizen is in such a rush to once again scapegoat Rowell’s Marina, and by extension the chronically over-taxed and under-served citizens of Key Largo, that it fails to mention far more wasteful expenditures.

Now taxes have to go up.  This shouldn’t come as a surprise.  Let’s not ever forget that community members expressed concerns about all these projects.  Concerns that were ignored.  Or worse, were used as an excuse to spend even more.

To seek tax and utility increases when our community is struggling with an unaffordable housing epidemic is callous. It is also a clear indication that our officials either have their heads in the sand or simply do not respect the expressed needs of our community.

I don’t disagree.  But once again, I have to ask where was the Citizen?  They are way too late now.  Where were their scathing editorials when the county’s reckless spending was flying out of control?  Where was their investigative journalism when it could have done some good?  Oh yeah, they don’t do investigative journalism.  They obediently repeat whatever lies they’re told.

True that.  Maybe its time the Citizen took a good long look in the mirror.