Looking at the wastewater projects makes one thing very clear, for Key Largo there is no upside to remaining unincorporated.  The county simply takes Key Largo’s tax money and squanders it elsewhere.  In effect, Key Largo’s tax money enables waste and subsidizes taxpayers who are often much better off financially.  It just doesn’t make sense.  Key Largo would be far better off under local control.  The two special districts have proven that when Key Largo citizens are in charge, an equal (or better) level of service is provided at a much lower cost.  There is no way the county could afford the Cudjoe Regional project as-is without Key Largo’s over-contribution.  If Key Largo were to incorporate it would take $3.5 million of infrastructure sales tax money with it.  Over $2 million of that would come directly out of the county’s pockets.  The rest would come from the other municipalities.  And that’s just one revenue source.  There are many others.

This “Monkey Math” series is about fact-checking documents produced by the county to justify their unwise and unfair wastewater funding policies.  It also exposes repeatedly used deceptive tactics, such as:
The process of fact-checking the revenues in the “Recipient Community” report also provided an opportunity to estimate what revenues might be available to an incorporated Key Largo.  In this post, I’ll discuss the fact-checking part of it.  For a complete discussion of the incorporation part, I need to look at expenditures.  And that’s going to take a while.
Fact-checking Revenues in “Recipient Community” Report
As I’ve said, context is often missing from the county’s reports.  In order to remedy that, I added the total amount received from each revenue source in FY2013.  I also added an estimate of revenues generated in the Cudjoe Regional area.  The additional information helps to provide a more complete picture.  Without further ado, here is the table.

My estimate of revenues generated by Key Largo differ from the county’s estimate by about $2.9 million.  Not only that, Key Largo generated about $8.5 million more than Cudjoe Regional in FY2013.  As I’ve said before, the revenue generated in a community shouldn’t be the deciding factor when it comes to allocating funding.  The only reason I even discuss this is because the of the county’s claim that Key Largo’s contribution isn’t significant enough to warrant fair funding.  This is just another nail in the coffin of that ridiculous argument.
A quick word about Municipal Revenue Sharing.  This calculation turned out to be more complicated than I bargained for so I went ahead and estimated it.  I took existing Florida municipalities that are similar in population to Key Largo and I averaged what they received from Municipal Revenue Sharing in FY2013.  I took the average and applied it to Key Largo.  They’re nearly all between $300,000 and $400,000 so my estimate of $350,000 shouldn’t be that far off.  The resulting table is below. 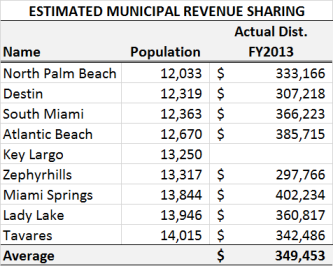