I think I’ve made a very strong case that Carruthers didn’t propose the Emergency Services Surtax (ESS) out of the goodness of her heart.  It’s not a “tax shift” that’s meant to benefit locals.  Clearly it is designed to help large property owners like those who donated to Carruthers’s 2012 campaign.  It is the locals who will pay more, including and especially the locals in Carruthers’s own district.

Key West has a very high proportion of renters, far higher than the county average.  While the Key West City Commission is pushing for a huge $55 million purchase to “preserve” workforce housing, here’s Carruthers trying to add an additional tax burden on those very same residents.  How does this make sense?  It doesn’t, of course, but then Carruthers is the queen of wasteful spending in Monroe County.  She’ll take money wherever she can get it, I suppose.

Locals in Marathon, Key Colony Beach and Islamorada won’t make out too well either.  But let’s focus on Key Largo for minute.  I believe Key Largo was the catalyst for Carruthers’s proposal.  The BOCC resents Key Largo.  Key Largo’s successes only highlight the county’s many egregious failures.  The county suffers by comparison and they know it.  Key Largo makes it very difficult for the county to explain away its many shortcomings.

Even worse, Key Largo’s special districts refuse to inflate costs, allowing no way for the BOCC to divert taxpayer money to wherever it is they divert it.  Key Largo makes life difficult for the BOCC just by being sane and responsible.  This is true of the Key Largo Wastewater Treatment District whose project costs less than half what Cudjoe Regional does per EDU.  This is true of the Key Largo Fire and EMS District who provides service at one-third the cost.

There’s no question that the same dynamic is at work with the municipalities.  But they are insulated from the county’s shenanigans to a greater extent because as incorporated entities they receive much of their funding directly.  That’s not to say that they are completely immune.  But Key Largo is an unincorporated area and must rely on the county for much of its funding.  The results, of course, have been financially disastrous for Key Largo.

When Tavernier started to question the excessively high cost of fire service, the county knew they had to find a way to make county-wide taxpayers foot the bill.  Cutting costs or operating more efficiently certainly is not an option!

A scheme like the ESS would certainly appeal to Monroe County’s parasitic nature.  They did something similar with the infrastructure sales tax and the wastewater projects.  It worked like a charm.  Why not try it with fire service, too?  Sure fire service is a life-health-safety issue and its nothing to play politics with, but since when does the county care about that?

The fact that Key Largo would be especially hard hit by Carruthers’s ESS scheme is, I’m sure, a bonus in the minds of the BOCC and the iPhone Bandit.  So what do the numbers look like exactly?

For Key Largo, it’s not even close.  Locals in that area would contribute over $200  more per year because of this additional sales tax.  Rest assured, it only gets worse when we look at the homesteaded properties by value. 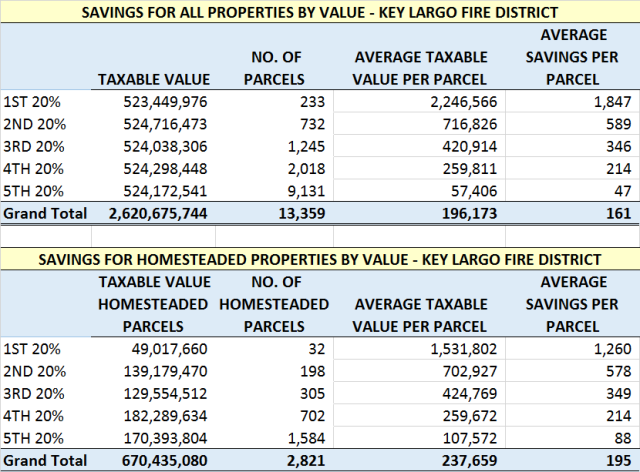 The vast majority of homesteaded properties in Key Largo would save around $88 per year on property tax.  However, there’s that additional contribution to the sales tax of about $417 per year.  That means that most local homeowners in Key Largo would pay an additional $329 per year.  And that’s on top of higher sewer assessments and higher than necessary sewer bills.

I wonder if Carruthers ever sat down to think about why communities like Key Largo (or Key West for that matter) try to control fire and rescue costs.  I wonder if it ever occurred to her that they might do this out of economic necessity.  Key Largo has a median household income of about $52,000, very similar to Key West.  That’s a far cry from the Key Haven area ($92,000) or Cudjoe Key ($81,000), which will be subsidized by this additional tax.  Someday the well will run dry.  With the housing crunch in Key West and so many people working multiple jobs in Key Largo it looks like “someday” has already arrived.

The vast majority of local homeowners county-wide won’t benefit at all from Carruthers’s “tax shift”.  Quite the opposite.  In general, they will actually contribute more.  Again we’re talking about the police officers, the teachers – the work force that the county claims to be so concerned about right now.

This entry was posted in BOCC, Fire and Ambulance, Key Largo's contribution. Bookmark the permalink.